Here is the recipe if you want to try the original TikTok Cinnamon Rolls before jazzing them up with pumpkin flavor.

In this recipe, we combine this amazing cooking hack with the flavor flavor of fall season; pumpkin.

These roll turn out moist, fluffy and with a delicious warming pumpkin flavor.

This recipe uses minimal ingredients and effort to turn a can of cinnamon rolls (any brand works!) into a gooey cinnamon roll.

In my original TikTok Cinnamon Rolls, I made a brown butter cream cheese icing that elevates the cinnamon rolls to the next level.

I highly encourage you to make this icing. Making brown butter takes about 5 minutes and it is totally worth it.

Brown butter adds a caramel-nutty flavor to the icing that makes it unique and delicious.

You can always use the icing that comes with the canned cinnamon rolls but making your own is much better.

What does heavy cream do to cinnamon rolls?

Heavy cream adds moisture to the dough. Since heavy cream is high on fat, it helps with making the cinnamon rolls fluffy and extra moist.

You could also use half and half on this recipe but if you are going for a Cinnabon-copycat, use heavy cream instead. 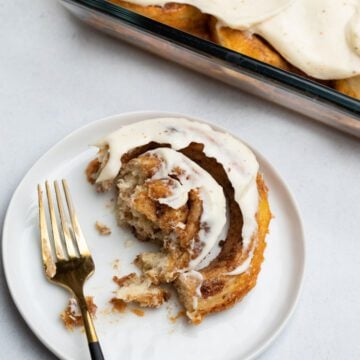