Upgrade your store-bought cinnamon rolls with heavy cream and they will taste better than home made rolls. If you love cinnamon rolls, try the Cookie Monster Cinnamon Roll.

Why you will love this recipe

In this recipe I'm combining the viral cinnamon roll hack with some of my personal favorite tips to elevate the flavor and texture of your cinnamon rolls.

Let's be honest, cinnamon rolls made from scratch are time consuming and sometimes we just need a sweet treat now. Using store-bought dough you don't need to wait!

Steps to make this recipe

For this recipe there are few steps but they are quick and they yield amazing flavor, so I highly recommend you follow the recipe, however I provide shortcuts if you wish to take them.

To make the rolls extra buttery, like those at the mall or the ones we make from scratch, we will make a melted butter and sugar mix.

But instead of just simply microwaving the butter to melt it, I urge to make "brown butter" by melting the butter on a pan in the stove over medium heat until the butter develops brown speckles.

Brown butter is rich in flavor and adds a note of caramelization that is hard to replicate. It is the best, so I encourage you to take the extra 5 minutes to make it.

For this recipe you will need few ingredients. I like to make my own cream cheese icing but you can use the icing on the cinnamon roll package. 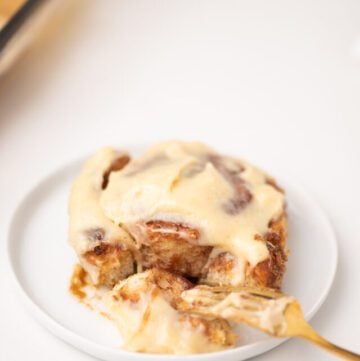 For the cream cheese icing

Tried this recipe?Let us know how it was!
« STK Scottsdale
4th of July White Wine Sangria »

Hi, Welcome to Tasty AZ where I share simple recipes with a Latin twist, my favorite restaurants and gastronomic travel inspiration.