This Cinnamon Roll Dump Cake is going viral on TikTok and since I loved the original Cinnamon Rolls with Heavy Whipping Cream I needed to try this one.

In this recipe, canned cinnamon rolls are baked with cream cheese frosting and cinnamon swirl cake.

I found the recipe to be quite sweet; I used canned cream cheese frosting as the TikTok video suggested and that adds extra sweetness.

This recipe is fairly simple to make. You just need to assemble the layers of ingredients and bake.

The first thing is to layer the cinnamon rolls in a single layer. I used a glass 9x13 baking dish.

The next step is to cover the cinnamon rolls with the cream cheese frosting. Add the layer with a spatula and spread as evenly as you can. I used the entire tub of frosting.

The next step is to sprinkle the cinnamon cake mix on top. I tried to break the lumps of cake mix and spread it as evenly as I could.

The cake mix comes with 2 packages; one of cake mix and one with a cinnamon sugar.

The next layer is the cinnamon sugar. This packet seems small at first but it is plenty to cover the cake.

The next step is to cut the butter into thin cubes and cover the cake with them.

I didn't slice mine too thin but next time will try to slice them smaller to make sure the butter is evenly baked into the cake.

After baking the cake, it should look like this. At First the butter seemed to be separated from the rolls but let it rest for a few minutes.

The cinnamon rolls raise and the cake mix creates a crust on them that adds extra texture and flavor.

The butter helps keep the cinnamon rolls moist and fluffy.

The last step is to drizzle the sugar icing that comes with the cinnamon rolls.

This recipe is best when enjoyed shortly after baking. Leftover can be stored and reheated but the cinnamon rolls will dry out quickly.

I highly recommend eating this when fresh. If you need to reheat; use the microwave in 10 second intervals until the roll is heated through. 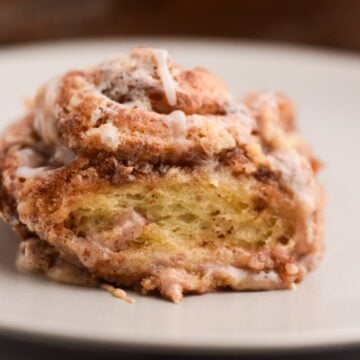