These Cookie Monster Cinnamon Rolls are fun to make. They are just as delicious as traditional cinnamon rolls but with a fun twist.

Reachel, the recipe creator behind these rolls, shared her recipe on TikTok (rd_eats) and I couldn't resist the urge to try it.

If you love baking try my Brioche Dough Recipe for making Dulce de Leche Donuts or my amazing The only chocolate chip cookie recipe you will ever need.

Why you will love this recipe

This recipe is fun, colorful and it combines two of my all time favorite treats together; cinnamon rolls and Oreos!

Instead of the traditional cinnamon and sugar mix that goes in the center of the classic cinnamon rolls, these ones add crushed Oreos to the mix and this elevates the recipe to the next level.

The ingredients for this recipe are simple and most of them are probably already in your pantry.

The only ingredient that I went to the store for was the royal blue coloring. Other than that this recipe uses pantry staples.

Steps to make the recipe

This recipe requires a bit of resting time (1 hour for the fist rise and 30 minutes for the second) so plan accordingly.

The first step is to make the yeasted dough by combining the milk, sugar and yeast. Allowing about 5 minutes for the yeast to activate.

Then you add the eggs and butter and mix until well incorporated. Once it is ready start adding the flour 1 cup at a time.

After you are done adding the flour, add the food coloring and allow the dough to rise for one hour.

Then crush the Oreos and mix them with the sugar and cinnamon. Roll the dough into a rectangle, add a layer of softened butter and add the Oreo mix.

Roll the dough lengthwise and cut the rolls with unflavored dental floss. They should be about 1.5 inches thick.

Add the heavy whipping cream to a baking dish and place the cinnamon rolls. Bake them and allow them to cool down slightly.

Make sure your yeast is fresh. This is the foundation of this recipe and it will fail if you use old yeast (been there, done that).

Use warm milk to activate your yeast. Make sure is not hot or it will kill the yeast and your dough won't rise.

Allow the dough to rise (1 hour) but don't exceed the time because that will over proof the dough and it the cinnamon rolls will come out though.

Add the heavy whipping cream to your baking dish. This is the secret to fluffy and pillowy cinnamon rolls. 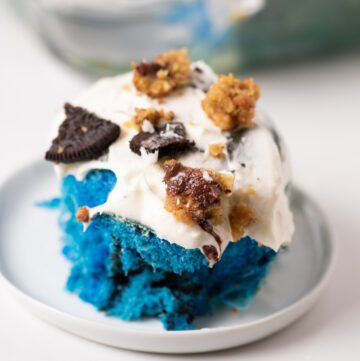 For the Cinnamon Rolls